Born in Rome on March 20th 1915 by Paolo and Maria Manfredi Frattarelli. He attends Collegio Nazareno in Rome, taught by Brothers Scolopi, where he obtains a High School diploma in classical studies in 1933. He joins the Rome University “La Sapienza” where he graduates in 1937 with a BA in Law.

He concludes his military service as Lieutenant in the Italian Army.

In 1939 he participates the public contest to become Notary, but due to the breakout of war the results are  notified only at the end of WWII. Only then he is appointed Civil Law Notary and assigned to the notary post of  Carsoli.

In 1942 he marries Maria Luisa Puccioni and from their marriage born Maria Grazia, Maria Pia, Paola and Paolo. Recalled to the army by his country, he joins his military division in Civitavecchia.

In the days following the September 8 1943 armistice, having rejected the offer of fascist representatives recruiting advocates of the Republic of Salò, Enrico is captured and deported to Germany and then to Poland, and confined in a concentration camp.

After the liberation in 1946, Enrico begins his civil law notary career in Formia, he is then transferred to Rome to join his father’s Notary office. He works passionately  until March 20 1990.

In his profession, he is committed with visceral interest as an active participant in much of the country’s economic and judicial history.
Enrico was a man of exceptional professional qualities and incredible human and moral values. He was always available and attentive to others’ problems, both professionally and spiritually. Many have sought his guidance, help, and to each he was able to indicate the correct and most beneficial path, looking beyond the immediate obstacle and taking in the larger picture.. 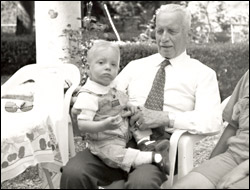